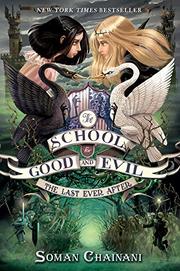 THE LAST EVER AFTER

From the School for Good and Evil series, volume 3

Good has won every fairy-tale contest with Evil for centuries, but a dark sorcerer’s scheme to turn the tables comes to fruition in this ponderous closer.

Broadening conflict swirls around frenemies Agatha and Sophie as the latter joins rejuvenated School Master Rafal, who has dispatched an army of villains from Capt. Hook to various evil stepmothers to take stabs (literally) at changing the ends of their stories. Meanwhile, amid a general slaughter of dwarves and billy goats, Agatha and her rigid but educable true love, Tedros, flee for protection to the League of Thirteen. This turns out to be a company of geriatric versions of characters, from Hansel and Gretel (in wheelchairs) to fat and shrewish Cinderella, led by an enigmatic Merlin. As the tale moves slowly toward climactic battles and choices, Chainani further lightens the load by stuffing it with memes ranging from a magic ring that must be destroyed and a “maleficent” gown for Sophie to this oddly familiar line: “Of all the tales in all the kingdoms in all the Woods, you had to walk into mine.” Rafal’s plan turns out to be an attempt to prove that love can be twisted into an instrument of Evil. Though the proposition eventually founders on the twin rocks of true friendship and family ties, talk of “balance” in the aftermath at least promises to give Evil a fighting chance in future fairy tales. Bruno’s polished vignettes at each chapter’s head and elsewhere add sophisticated visual notes.

Ultimately more than a little full of itself, but well-stocked with big themes, inventively spun fairy-tale tropes, and flashes of hilarity.