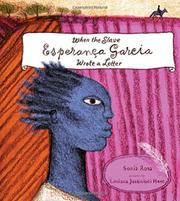 WHEN THE SLAVE ESPERANÇA GARCIA WROTE A LETTER

By way of tribute, two admirers spin a tale around a truly rare document: a petition sent by an 18th-century enslaved woman to a Brazilian governor.

The letter, a brief one reporting a new master’s ill treatment and begging for permission to rejoin her husband and have her children baptized, was discovered only in 1979 and is presented here in a modernized translation. Around it Rosa embroiders a rudimentary storyline that feels oddly disconnected. She begins with Garcia herself explaining that her previous, Jesuit owners had taught her to read and write before she was separated from her husband, then switches to the third person at an arbitrary point, then just as abruptly shifts from narrative to exposition at the end. Also, there being no record of a reply to the letter, Rosa opts just to leave Garcia waiting for one, closing with the hyperbolic claim that her “voice was a forceful cry for liberation.” Hees’ richly hued illustrations show Afro-Brazilian influences in stylized background settings made of patterned bands and very dark-skinned figures with strong, composed features. A historical note includes a map of the colonial locale but no reproduction of the actual letter.

Garcia is apparently lost to history aside from her petition, but its very existence marks her as “truly an unforgettable woman!” (Picture book. 6-8)