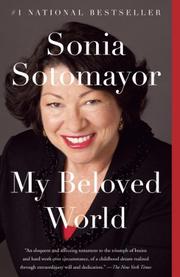 As a child in South Bronx public housing, Sotomayor was diagnosed with juvenile diabetes. Her Puerto Rican parents’ struggles included a father’s battle with alcoholism that would claim his life when Sotomayor was 9, leaving her mother, a former Women’s Army Corps soldier turned nurse, to raise her. Time spent with her cousin, Catholic school friends and her beloved grandmother helped to calm the chaos of life in the projects. As Sotomayor entered adolescence, her mother’s strong belief in education spurred the author to thrive in school and develop an appreciation for justice and the law. The author vividly narrates her scholarly adventures at Princeton, where she advocated for Latino faculty, and Yale Law School, where she dealt with smaller cases in preparation for the complexities of work in the district attorney’s office. In 1992, she received an appointment to the U.S. District Court for the Southern District of New York. The author’s text forms a cultural patchwork of memories and reflections as she mines the nuances of her parents’ tumultuous relationship, fondly recalls family visits in Puerto Rico and offers insight on a judicial career that’s just beginning when the memoir ends. Sotomayor writes that her decision (a shrewd one) to close her story early is based on both a political career she feels is “still taking shape” and a dignified reluctance to expand upon any recent high court “political drama,” regardless of the general public’s insatiable curiosity.

Mature, life-affirmative musings from a venerable life shaped by tenacity and pride.