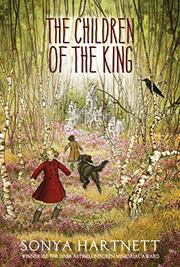 THE CHILDREN OF THE KING

No matter how far north of London the Lockwoods travel, they can’t escape the ravages of World War II.

Twelve-year-old Cecily Lockwood isn’t happy to leave her revered father behind in London, but she’s secretly thrilled she and her older brother, Jeremy, are bound for Heron Hall, her uncle Peregrine’s lovely country manor. At the train station, they convince their mother to take in a 10-year-old London evacuee named May Bright, who, to Cecily’s delight, becomes a sort of sister to her, though (less delightful for bossy Cecily) she’s “prone to bouts of independence.” Through her likable, vividly wrought characters, Hartnett respectfully captures the depth and ferocity of childhood. The poetic descriptions of the girls’ rural wanderings are to be savored like the best tea and biscuits, but the masterful lyricism never slows the suspenseful story of Cecily and May’s discovery of two “horrid boys” in velvet jackets, hiding among nearby castle ruins…or the rising tension between Jeremy and his mother as he battles his sense of helplessness as others fight the war. Uncle Peregrine tells a 450-year-old story whose themes are curiously relevant to World War II England…perhaps even to the be-velveted boys-in-hiding.

Mystery and history dance a mesmerizing waltz in this poignant, thoroughly entertaining novel that shows how “[t]he past lives everywhere.” (Historical fiction. 11-14)