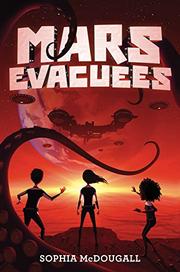 In a future in which alien intervention has drastically reversed global warming, British schoolgirl Alice Dare discovers that, instead of beginning a new semester at Muckling Abbot School for Girls, she's been drafted into basic training on Mars, fighting the enemies of the human race.

Science-fiction novels have always borrowed from one another, but it’s surprising how many different tropes McDougall employs. There’s plenty of space warfare, of course, but there are also scenes that resemble stories about boarding schools. And when the students meet the Morrors, the dialogue owes a huge debt to Adam Rex’s The True Meaning of Smekday (2007). Oddly enough, all this sampling and shifting of tone increase the novel’s suspense. The second half of the story is one reversal after another, and that makes up for the much slower early chapters. People reading the first 50 pages may start to list things the characters aren’t doing: They don’t encounter aliens. They don’t fire weapons. They don’t go to Mars. There is, however, a fair amount of schoolwork. Alice’s deadpan narration is always entertaining, and a few sentences are dazzling, like a description of Earth from far away: “And then we saw a pale bluish star that was brighter than the others, and it grew in the dark, like a flower.”

The strange pacing sometimes makes the book feel unbalanced, but the action sequences are worth the wait.