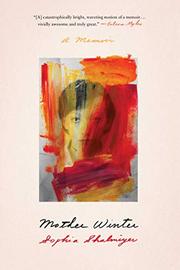 A feminist nonfiction writer’s memoir about growing up between two cultures and her search for the mother from whom she was separated as a child.

When she was young, Shalmiyev’s Azerbaijani father took her alcoholic Russian mother to court. A judge declared Elena—who was so addicted she drank cologne when she didn’t have vodka—an unfit mother, estranging her from the family. Her father spirited his daughter away from Leningrad “without a goodbye” to Elena just before the fall of communism and immigrated to the United States. Settling in New York, he married a Ukrainian woman who followed him from Leningrad. The teenage Shalmiyev developed an interest in feminism and female artists such as Sappho, Doris Lessing, and Kathy Acker, among others. Throughout, the author interweaves references to these figures among the impressionistic vignettes that comprise the primary narrative. She also recounts the days in her early 20s when she worked as a peep show stripper among women “caustic with mocking sarcasm, not having any of IT.” With Elena never far from her thoughts, she also secretly wrote letters to her mother in English as a “process of mourning my mother [and]…what she did and did not provide me in life.” Shalmiyev then returned to Russia to look for Elena only to find that she could not locate her mother anywhere. She continued living aimlessly after that, indulging her penchant for parties and “loud and raucous night[s] that ignore[d] the nuzzling rays of daylight.” When she finally married, it was with trepidation—not just for the end of her “party-girl” days, but also for a life of settled domesticity. Shalmiyev knew it was in her just as it was in her mother “to leave [her] children…[and] make them unhappy.” Ultimately, though, she chose a path that tested her ability to nurture and forgive. A rich tapestry of autobiography and meditations on feminism, motherhood, art, and culture, this book is as intellectually satisfying as it is artistically profound.