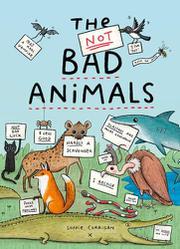 THE NOT BAD ANIMALS

Forty-two creatures of ill repute, from scorpions to hyenas, put on their best faces and protest that they’re just misunderstood.

In paired double-page spreads, Corrigan first presents for each animal the case for considering it scary or gross, then, with the page turn, allows it to contradict itself. “I’m creepy and I’m crawly,” a spider supposedly gloats. “I spin webs from my butt and leave them in places where I KNOW you’ll get stuck in them.” In the following spread, the spider points out that “Only half of my kind spin webs, and we really, REALLY don’t want you to get stuck in them!” Along with pointing to roles in the natural order and including many crowd-pleasing references to butts and poop, these counterarguments tend to run along the lines of the rat’s “I’m a fluffy little SWEETIE!” and the toad’s “I am a plump lump of CUTENESS!” Each testimonial is backed up by a box of background information baldly labeled “FACTS.” Readers may find the chorus of smiley faces and claims of adorability unconvincing, but they will at least come away with more nuanced impressions of each creepy-crawly. The humorous cartoon illustrations don’t measure up to the in-your-face photos of Seymour Simon’s classic Animals Nobody Loves (2001), but this gallery of beasties unfairly regarded as “icky and ewwy and downright gross” is considerably broader.