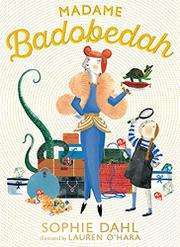 Is the newest resident of the Mermaid Hotel “an ancient supervillain on the run”?

Mabel, the young narrator, is an adventurer who likes to go barefoot, pockets full of small packets of marmalade and butter for snacks. When an imperious old woman, hair “red and crunchy, like a candy apple without the stickiness,” arrives with a great deal of baggage, two dogs, two cats, and a tortoise who skitters “along the floor like a man on a mission,” Mabel dubs her “Madame Badobedah (rhymes with ooooh la la).” Mabel is certain that the new occupant of Room 32 is a fugitive criminal, perhaps “an international jewel thief.” Mabel peeks in through the keyhole. But, invited in for tea, Mabel tells Madame Badobedah about the pirate Anne Bonny, and the two imagine a wild escapade on the high seas. Mabel learns that Madame Badobedah had been a ballerina and had “crossed the sea on a big ship, because there was a war.” Dahl’s voice for Mabel is young and amusingly opinionated. O’Hara’s watercolor illustrations have a retro feel, with lighthearted views of the seaside hotel, Mabel and Madame—and some mermaids. All the characters are white. The appeal of Mabel’s fanciful take on the older woman’s past grows along with their friendship, transforming the poignancy and losses of old age into something sweetly adventuresome and glamorous.

A warmhearted tale of intergenerational connection.