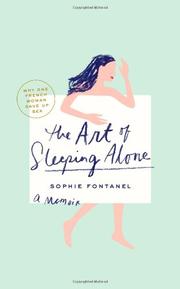 THE ART OF SLEEPING ALONE

Why One French Woman Gave Up Sex

Parisian novelist and Elle France editor Fontanel explores her decision to practice celibacy for more than a decade, beginning at age 27, and avers that sexual liberation ought to include the freedom to not have sex.

"I'd had it with being taken and rattled around," she confesses, adding that she was tired, both physically and emotionally, of saying yes to lovers. In need of tranquility, she opted to stop having sex and, in the months that followed, found that she'd never been happier; she felt safe, confident and nurtured. In chapters averaging two to three pages, Fontanel cuts her life into vignettes that jump between time periods to reveal personal details about her romantic endeavors and heavy social calendar. Upon learning about her decision, friends and acquaintances offered endless questions and skepticism, and Fontanel artfully and humorously describes the couples who cast aspersions on her choice. "Why valorize the concept of a sex life simply because it's a sex life?" writes the author. "Leave people the treasure they posses: their indescribable equilibrium." Fontanel had been sexually active with men since her teenage years. Her depiction of celibacy isn't prudish or dry but lush; she isn't shy when describing either her previous affairs or her current erotic fantasies, and her frankness keeps the book from straying into polemical territory. The writing is stripped bare, with no extra fat or flair, and this simplicity works in the author’s favor. Fontanel highlights encounters with male friends and dates, detailing their conversations in a way that underscores her conclusion that sex requires meaning; it is more than merely a superficial connection.

The author thankfully avoids self-righteousness, so while she offers a guide of sorts for those who may be interested in following the same path, her voice and story hold up on their own, as do her insightful, darkly funny observations on societal expectations regarding sex.