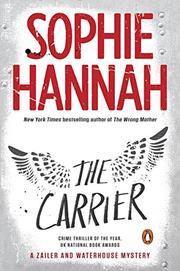 The smothering of a supremely unlikable woman provokes a conspiracy, a false confession, a hysterical outburst and round upon round of sifting through the evidence by DC Simon Waterhouse and his wife, DS Charlie Zailer (Kind of Cruel, 2013, etc.).

Francine Breary was no prize even before the stroke that left her unable to move or speak. She’d taken accountant Tim Breary away from Gaby Struthers, the brilliant, wealthy tech developer he loved, and persuaded him to marry her, then proceeded to make his life miserable. So it’s no wonder Tim has confessed to her murder, adding parenthetically that he doesn’t know why he did it. Every detail of his confession is backed up by the other residents of The Dower House—former caregiver Kerry Jose; her husband, Daniel; Francine’s caregiver, Lauren Cookson; and Lauren’s brutal husband, Jason. But Gaby, stranded overnight in Düsseldorf with an obnoxious stranger who turns out to be Lauren, hears her unwanted companion insist that Tim is being sent to his death for a murder he didn't commit—then sees her escape into the night before Gaby can question her further. Lauren's outburst throws new light on the man Charlie, watching from the sidelines, has dubbed the Don’t Know Why Killer but raises a host of uncomfortable new questions which are meat and drink to Hannah (The Orphan Choir, 2014, etc.). Before the curtain finally comes down, Simon will have heard unwelcome revelations from his boss’ daughter, questioned Gaby about who assaulted her moments after she walked out on her live-in lover, and contemplated a second body cooling in the morgue. Hannah bores down deep into her tiny cast’s secret lives, then still deeper, pausing along the way to cite or reprint a dozen poems, some of them clues, some not.

Fans will love the endlessly knotty complications; those unable to commit their full attention to the problem at hand may well quit in exhaustion before the denouement.