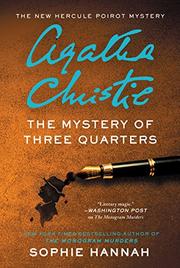 THE MYSTERY OF THREE QUARTERS

Hercule Poirot gets pulled into a mystery in the most awkward possible way when someone signing himself Hercule Poirot writes four letters accusing four different people of the same murder.

Not only did she not kill Barnabas Pandy, a furious Sylvia Rule assures the famous detective; she’s never even heard of him. Neither has John McCrodden, who assumes that his father, Rowland, whose fierce advocacy of the death penalty has won him the sobriquet “Rowland Rope,” conspired with Poirot to accuse his long-estranged son of murdering Pandy. Annabel Treadway has certainly heard of Pandy—he was her grandfather, after all—but she tearfully claims that she didn’t kill him either, though at least she’s willing to listen to Poirot’s own protestations of innocence. So is ebullient Turville School housemaster Hugo Dockerill, who passes the accusation off as a joke despite his own connection to Pandy, whose great-grandson, Timothy, Annabel’s nephew, is a pupil of his. With all due respect to the obvious questions he shares with his “friend and occasional helper,” Scotland Yard Inspector Edward Catchpool—which, if any, of these suspects actually killed Pandy? Why would anyone trouble to drown a 94-year-old slate magnate, no matter how wealthy has was, in his bathtub? Who wrote the letters?—Poirot is fascinated by a more puzzling question: Why would anyone want to write those four letters in the first place? A series of variously edgy conversations, a proffer of alibis, and another sudden death will intervene before Poirot, skillfully exploiting his trademark fondness for neat patterns, is able to make good on his uncharacteristically rash promise to reveal all in a roundup of the unusual suspects only a week later.

As in her two earlier Agatha Christie pastiches (Closed Casket, 2016, etc.), Hannah is content to supply boundless ingenuity in place of more 1930s detail, this time adding a divinely inspired denouement that seems to go on for longer than the week that leads up to it.