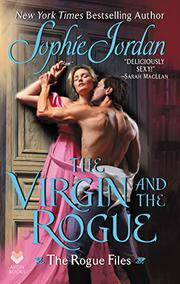 THE VIRGIN AND THE ROGUE

From the Rogue Files series, volume 6

The sixth in the Rogue Files series is a lusty reversal of the rake-and-the-wallflower trope.

In Regency-era England, Charlotte Langley, a self-described “dull bird,” is about to marry boring Billy Pembroke. Just before an agonizing dinner with her in-laws, who barely tolerate her, she’s plagued with menstrual cramps. (Just a splash of realism before the story takes a magical turn.) When her sister mixes her a home remedy, Charlotte is overcome with passion—and quickly turns it on the wrong man. The effects of the elixir are equal parts hot and hilarious. Though he was once a lady’s man, Kingston, the bastard brother of the Pembroke clan, has been celibate ever since his mother fell gravely ill. But he can't say no to Charlotte. Is she drunk on a love potion or drunk on love itself? If you ask Charlotte, she couldn’t possibly betray Billy, whose best quality is that he's letting her choose where they live. If you ask Kingston, she’s engaged to the wrong man. There’s no shortage of drama leading up to this happily-ever-after. Charlotte’s heart is in the right place, but her lips have poor aim.

A refreshing dose of fun—and the best in the series.