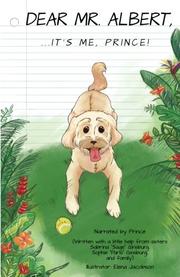 In this children’s book, a service dog for veterans finds a new home.

The Ginsburg sisters’ debut was inspired by the Dogs 4 Disabled Veterans partnership with the Martin County Correctional Institute in Florida on “a Train-the-Trainer program called B.A.R.K. (Beacon Among Rescued K9s).” The authors’ dog, Prince, was trained by a prison inmate, Mr. Albert, through this scheme. But due to his Addison’s disease, Prince couldn’t become a full-fledged service dog; instead, he lived in foster homes before being adopted. In 14 letters, Prince updates Mr. Albert on his new life with a human mom and dad, two young sisters, and his “puppy brother,” Bailey. His missives resemble those of an excited kid writing home from camp. But with the text-speak acronyms (like OMG and TBH), he also sounds like a teenage girl—“Love … it! Heehee … LOL.” The word “love” is always accompanied by a heart icon, a rather cutesy affectation. Still, it’s impossible to forget that the narrator is actually a dog: he loves chasing lizards and ends most letters with “Ta-ta for now. Lick, lick, and woof, wooof.” Prince tells Mr. Albert about a visit from the family’s Kentucky cousins, and of phoning to reassure a doggy friend who’s afraid of an impending thunderstorm. He learns to bring his mom her misplaced glasses, and sparks a panic about rabies when he catches Susie the squirrel. There are also some mild scatological incidents that are likely to amuse Captain Underpants fans: “Geez, I really need to go potty. Gotta run” and “I sometimes chase my tail trying to smell my own farts.” The didactic purpose of the book—which features adorable black-and-white images by debut illustrator Jacobson—is clear in its focus on disabilities and volunteerism as well as its vocabulary lessons. Any potentially unfamiliar words are explained in footnotes and helpfully gathered into a glossary. But the definitions are not always straightforward: for example, “Complimentary is an expression used when explaining you liked what someone did.” The authors plan a sequel; a portion of this volume’s proceeds will go to B.A.R.K.

A cute canine story that encourages gratitude as well as compassion toward prisoners and the disabled.