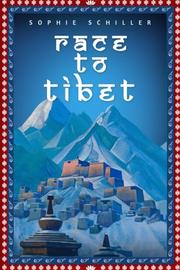 Schiller (Spy Island, 2013, etc.) fictionalizes the voyage of an ill-fated and little-known French party to Tibet during the 1890s.

Insatiable French explorer Gabriel Bonvalot burns to mount an expedition to Tibet to enter the mysterious city of Lhasa, where no Westerner has ever been. Even the intrepid Russian-Polish trekker Nikolai Prejevalsky fails to reach the fabled city that Tibet has declared off-limits to Europeans, and his travels even eventually cost him his life. One problem plagues Bonvalot in carrying out his improbable plan: he lacks the financial wherewithal to organize such an ambitious venture. To the rescue comes the Duke of Chartres, whose noisome and mischievous wastrel son, Prince Henri, has made a distraction of himself through his wanton ways. Bonvalot promises the Duke to take Henri along for the ride in exchange for the Duke’s fiscal backing. Despite Bonvalot’s protests, the winsome Camille Dancourt wants to find her long-vanished husband, lost somewhere in Tibet. The self-assured Dancourt joins this unlikely crew as it plods ever farther and higher into the thin Tibetan air that makes the hapless band increasingly sick. In addition to battling nature, Bonvalot finds himself tormented by Prejevalsky’s ghost, which appears at inauspicious moments. He doesn’t know whether the ghastly specter is caused by his own mental instability or if the phantom actually exists. Brooklyn author Schiller, an apt storyteller, spins out the many exploits, the gnawing hunger, and the searing cold that befall the adventurers and their companions, including the colorful Belgian missionary Father Dedeken, as they wander deep into the far reaches of the Tibetan hinterlands. In one episode, the group gets caught in an avalanche that is a “dash close for comfort,” says the French prince, sounding for all the world like a posh English chap. This cultural sleight of hand works, though, and Schiller evokes the Victorian era and its explorer ethos through a tale that in style and design should prove compelling to the historical fiction fan.

An intriguing, sometimes-florid, but fast-paced, novelistic account of a European expedition into the wilds of Tibet by an accomplished thriller and historical adventure writer.