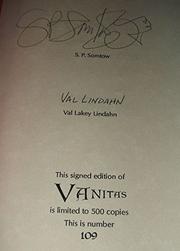 Third—and, apparently, last—of Somtow's yarns (Valentine, 1992, etc.) about the rock star and 2,000-year-old eunuch adolescent vampire Timmy Valentine, who has bestowed his vampirehood upon Angel Todd in exchange for the latter's human soul. Nevertheless, there are still vampires about, notably in Bangkok, where painter Lauren McCandless records the disposition of their victims' bodies in photographic detail. Meanwhile, Timmy's latest album is a flop—his music now lacks bite—so his promoters propose to send him on a huge loss-making world tour as a tax write-off. Accompanied by vision-quester PJ Gallagher, PJ's Thai wife, Prem, and Pamina Rothstein—a desperately wannabe vampire who can't find anyone to bite her—Timmy will track down the last of the vampires. Prem traps vampire Angel Todd in a bottle. Various side trips through history—Shakespeare, Dracula, Marlowe—intrude upon the proceedings, which feature more punk than splatter. There are even some jokes, and a showdown atop an erupting Indonesian volcano. Somtow wraps up his enlightened bloodsucker's career with all the gore and horror of a vegetarian vampire chomping on a beefsteak tomato.