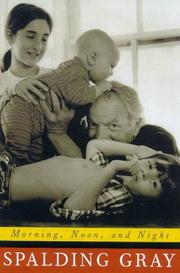 Gray (It’s a Slippery Slope, 1997, etc.) is an indefatigable talker. That’s how he makes his living. Here he talks some more, a lot more, as he muses his way through one recent day. It’s no Bloomsday, this day in the life of Spalding Gray. It starts slowly and works its way up to pedestrian speed. Eventually, though, he gets moving with deep thoughts about love, death, and related matters. The flowing discourse concerns home life in Sag Harbor, New York, with patient Kathie; Marissa, her daughter by an earlier liaison; their young son, Forrest; and baby Theo. There are, naturally, diverse thoughts about family life, its joys and terrors. This domestic field has been plowed before and Gray does as well with it as the next self-absorbed 56-year-old with a fear of sons. There is, to be sure, some humor. He attempts to teach his boy the semiotics of the word “shit,” follows with a riff on ATMs and thence to thoughts of bank tellers’ underwear. On and on he goes, offering vagrant comments on hand-propelled lawn mowers, his late mother’s flatulence, churches, and, perforce, sex. Like a latter-day George M. Cohan, he’s not above waving Old Glory, “the most beautiful of all the flags in the world.” Sometimes he’s an artful old philosopher and sometimes he’s Al Bundy. (Kathie calls contractors; her family name is Russo “and I figure that’s good, because so many of the contractors are of Italian-American descent.”) Gray’s shtick is to seem to let it all hang out in an excess of introspection. Sporadically, there is a universal quality. At other times, it’s a lot, a surfeit, a plenitude of unilateral conversation. While others may be ready to cry “uncle,” his many fans will consider the talk just fine. As a performed monologue, the words are probably charming and strong in the sentiment department. On paper, it’s light, light entertainment as Gray disrobes again.