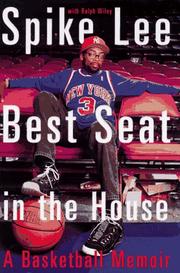 BEST SEAT IN THE HOUSE

by Spike Lee with Ralph Wiley

Commentary on professional basketball woven through a memoir and reflections on the state of late-20th-century, interracial America. At some point in every broadcast of a New York Knicks game in Madison Square Garden, the camera zeroes in on filmmaker Spike Lee in his courtside seat (for which he pays $1,000 a game), dressed in Knicks jersey and cap, often caught in a moment of great emotion. For all the praise and criticism generated by such films as Malcolm X and Do the Right Thing, Lee contends that he has gotten more visibility from his association with basketball: for the style- setting commercials he has shot for Nike, and for ``having the best seat in the house.'' Writing with Wiley (What Black People Should Do Now, 1993; Dark Witness, 1996; etc.), Lee chronicles his long journey with the Knicks from the nosebleed seats to courtside; from the night as a 13-year-old when he chose the Knicks 196970 championship game over his father's jazz concert, through ensuing decades of teams bad, mediocre, and near-great. Simultaneously, he tells the story of his life and career, intercut with interviews with many of his favorite players, including Clyde Drexler, Bill Bradley, George Gervin, John Starks, and Michael Jordan. Just as in Lee's films, the style flows from street vernacular to standard English, from irreverent and often hilarious observations to serious and intensely reflective commentary, from information to provocation. More than just a superfan's dream come true, to play sportswriter and be allowed to get inside his heroes' heads, Lee attempts to do with basketball what many writers have done with baseball: use it as a metaphor for life and the social condition. Just like the athletes Lee admires most, he and Wiley play their hearts out here, making this one of the best sports books of recent years. (8 pages of b&w photos, not seen) (Author tour)