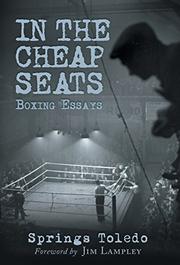 In the Cheap Seats

A collection of essays explores the “sweet science” of boxing and its unique culture.

Capturing the “poetry” of one of the most brutal of sports might seem like an oxymoron. But Toledo’s (The Gods of War, 2014) book is a largely successful attempt to do just that for boxing, his collection of essays a testament to both the primeval power and the pugilistic purity of the “sweet science.” “The iconic figure of the boxer speaks to anyone who struggles; which is to say he speaks to all of us,” Toledo writes. “Prone, he tells us we’re not alone. Rising, whether in victory or just to beat the count, he tells us we can too.” The author provides vivid accounts of fights featuring everyone from legendary champions such as Roy Jones, Manny Pacquiao, and Floyd Mayweather to lesser-known boxers like “Hammerin’ Hank” Lundy, Gennady “Triple G” Golovkin, and “the American Nightmare.” Toledo is as adept with technical analysis—the master boxer “uses pizazz punctuated by jabs to con his opponent into a pace and rhythm designed to sap his spirit”—as he is with physical description. One out-of-shape fighter’s torso “had the consistency of a week-old party balloon,” Ukrainian heavyweight champion Wladimir Klitschko has “the face of Kiev or Peski between shellings,” and a welterweight is “short and wide like an image in a funhouse mirror.” The author also sees the metaphorical possibilities of boxing, comparing the violent history of New York City to the “visceral” style of Jack Dempsey. “The city’s aggression is innate....In NYC, everyone is Dempsey,” he writes. In changing the narrative of a fight, an aging Mexican boxer “suggested that we can change our own narratives—our own ultimately dismal expectations—as we contend half blind against mauling life and marching time.” In these well-written, sharply observed essays, the author may sometimes go a bit overboard in his ruminations, suggesting at one point that “the boxer is a proxy preparing the way for all of us.” But with his passion and precision, Toledo becomes a worthy successor to such vaunted boxing writers as A.J. Liebling and Bert Sugar.