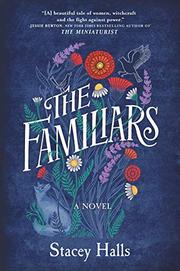 The lives of two young women intersect in a novel that imagines the story behind a famous 17th-century witch trial in northern England.

The narrator of journalist Halls' dramatic first novel is 17-year-old Fleetwood Shuttleworth, married at 13 to Richard Shuttleworth, lord of Gawthorpe Hall. She's pregnant for the fourth time, though each of her earlier pregnancies has resulted in a miscarriage. Desperate to produce an heir so she won't be cast aside for a more fertile wife or mistress, and even more frantic to survive the childbirth she suspects may cause her death, she seeks out the help of local midwife Alice Gray. The two have become friends, and Fleetwood's pregnancy is proceeding smoothly, when Alice is accused, along with a dozen of her friends and neighbors, of witchcraft and jailed in a dungeon by a local magistrate. Fleetwood, traveling around the countryside accompanied only by her mastiff, Puck—to her husband's chagrin—must try to find a way to free Alice before she is condemned to death. The characters, places, and some of the major events in Halls' well-researched novel are historically accurate, though the author adds some fictional embroidery: There's no evidence that Fleetwood and Alice met, let alone formed an alliance. For better or worse, this is essentially the story of aristocratic Fleetwood rather than commoner Alice, who remains a shadowy figure. Fleetwood is a plucky and determined, if not particularly complex, character. Halls, whose plot sometimes relies too heavily on information concealed for the sake of narrative convenience, adds a few hints of magic to the plot, though she resists using it to get her characters out of trouble. Her main strength lies in her depiction of the difficulties of life for women in this time and place, where pregnancy and childbirth posed a real threat to life and acting in socially inappropriate ways could get one condemned to hanging.

A solid if not entirely credible historical novel.