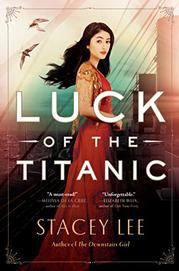 LUCK OF THE TITANIC

Seventeen-year-old Valora Luck boards the Titanic in search of her twin brother—and destiny.

As children, Val and Jamie performed acrobatics to bring in money during lean times, dreaming of one day becoming circus stars. But after their White British mother’s death, Jamie left to work for the Atlantic Steam Company while Val stayed in London to care for their Chinese father. Now, with both parents gone, Val is determined to find what’s left of her family and forge a new path in America. There is, of course, the Chinese Exclusion Act to contend with, but Val is confident that she and Jamie can convince one of the ship’s passengers, a part owner of the Ringling Brothers Circus, to hire them and bring them into the country. Unexpected allies provide help along the way, including an American couture designer and Jamie’s fellow Chinese steamship workers. Issues of racial and class discrimination are seamlessly woven into the story as Val’s adventure takes her through the Titanic’s various decks, from a first-class suite to the boiler rooms. Her wit and pluck give the story such buoyancy that when tragedy strikes, it almost comes as a surprise. Anticipation of the inevitable adds a layer of tension to the narrative, especially with a sober note prefacing the book that informs readers, “Of the eight Chinese passengers aboard the Titanic, six survived.”

A gem from start to bittersweet finish.