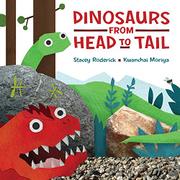 DINOSAURS FROM HEAD TO TAIL

From the Head to Tail series

Dinos rendered as cut-paper collages in bright, mostly primary colors pose next to basic facts about each in this gallery for younger devotees.

Set up as a guessing game, each entry opens with a spread-sized body part—“What dinosaur had jaws [head, neck, tail, etc.] like this?”—that gives way with a page turn to a full-body view. Along with identifications (“A Tyrannosaurus!”), Roderick supplies three to six simply written sentences of descriptive information for each. The long-clawed plant eater Therizinosaurus and crested Parasaurolophus join the main roster of usual suspects, as does a flying Pteranodon with the proper note that it was not a true dinosaur but a “cousin.” Seven other dinosaurs come in for cameos on a closing spread. The digitally assembled visuals reflect the narrative text’s simplicity; the dinosaurs, ranging in color from vivid scarlet to clear, pale blue, are made from just a few jaggedly cut pieces and sport the same wide, free-cut round eyes. Moriya adds knobbly textures and subtle brush strokes to the surfaces and places the figures in minimally detailed settings composed of mixed photos and cut paper.

One more addition to the thundering herd, easier on the eye than many and as suitable for reading aloud as alone.