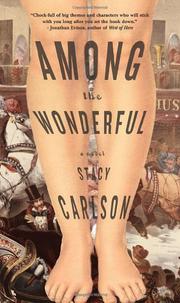 Talky historical novel about the business of the freak show business.

It never amounts to a tour de force, but Carlson’s debut does a creditable job of bringing 1840s New York to life—the language is right, the clothing correct, the mundane details of ordinary encounters just so. Trouble is, much of the novel concerns encounters very far out of the ordinary, with required lashings of willingly suspended disbelief that venture into the realm of magical realism, always a difficult genre for an American to pull off. The setup is promising: A staff taxidermist at a New York natural history museum, Emile Guillaudeu, is required to remake his collections to suit new owner P.T. Barnum, who has little use for the stuffed owls of old and is intent on crafting the cabinet of curiosities that would make his name. The transformation is not easy, and not eagerly awaited by every member of the public, either; says one protestor against the scheme, “Barnum’s Congress is an abomination! It must be stopped!” Alas for Guillaudeu, the rubes require constant entertainment, and so his glass cases are out in the hallway and strange bits of living creation are in. Enter Ana Swift, a giantess, who would rather be anywhere else but playing her part in the freak show to earn her keep. Ana is self-aware, smart, concerned for the well-being of her fellows as they’re jostled by crowds and robbed by management—a case in point being the so-called Aztec Children, who, as their keeper puts it, were “malnourished and frightened” but were kind enough to lead him “into the jungle to the site of their former glory,” revealing urns of gold so abundant “that Cortés himself would have been jealous.” Both Guillaudeu and Swift, then, are on a collision course with the elusive Barnum, the Godot of the piece—and when the crash comes, it does so, of course, tragically.

Carlson serves up a nice commentary on the entertainment racket, and with carefully crafted prose that too often goes on just a beat too long. Still, a refreshing take on an aspect of and time in American history that are too little known.