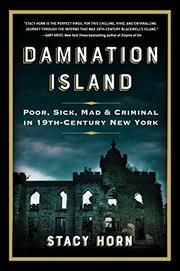 Somber study of a dark, little-known episode in the history of New York, when Riker’s Island wasn’t the only warehouse for the condemned.

It makes good sense, on reading Horn’s (Imperfect Harmony: Finding Happiness Singing with Others, 2013, etc.) latest, why the 2005 horror film Dark Water found so appropriate a setting on New York’s Roosevelt Island. In the late 1800s, writes the author, that small chunk of land, barely 150 acres, saw four kinds of unfortunate denizens: the mad were shunted off to the island’s Lunatic Asylum, the destitute to the Almshouse, the vagrant or indigent to the Workhouse, and the seriously criminal to the Penitentiary. Each offered its own version of a living hell, and despite reports by early whistleblowers, not much was done to improve the condition of the inmates. “You can have no idea…what an immense vat of misery and crime and filth much of this great city is!” exclaimed a social reformer who worked on the island, and Horn’s account paints an exacting portrait of just how true that was—and how summary the judgments against the lower class could be. Of interest to students of Foucauldian history is the author’s contrast of what was then called Blackwell’s Island with facilities for the well-to-do, such as the Bloomingdale Insane Asylum near Central Park, with its well-appointed libraries, plush chairs, and expensive artwork. No such amenities were to be found on Blackwell’s, which saw appalling levels of disease, starvation, child mortality, and other ills. Despite such demerits, as Horn writes, the rate of escape from the island was low and the level of recidivism, particularly among younger inmates, high: “At ten the boys are thieves,” noted one official, “at fifteen the girls are all prostitutes.”

Horn engagingly explores a history that, perhaps surprisingly, extended into the 1960s, when the renamed island became a site for mixed-income housing.