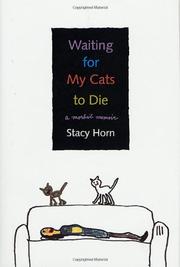 WAITING FOR MY CATS TO DIE

A middle-aged single woman living with two diabetic cats in a shabby, haunted New York apartment chronicles her anxiety, her obsession with death, and the unending failures that have plagued her personal and professional life.

Admitting that her first book, Cyberville (1997), did not sell well, Horn attempts to boost her self-esteem by penning these “memoirs,” which focus on her thoroughly depressing life and awkward personality. Just over 40 years old, she has forsaken any hope of meeting “the right guy,” contenting herself with very occasional one-night stands. Her idea of intimacy is demonstrating the fat rolls on her tummy to a male friend. Even her business gives her no opportunity to get away from her problems. Horn is the founder of the chat room Echo.com, a place where a bunch of unhappy individuals spend hours rehashing their own misery. Unsurprisingly, many of her client “chatters” do not pay their bills, and Horn has to supplement her meager income working in a local bookstore. Her fixation on mortality drives her to search for deceased ancestors and abandoned cemeteries, and to conduct interviews in old-age homes. The investigation she launches to discover the identity of the sad ghost who was marooned in her apartment after some terrible tragedy occurred there in the ’50s is perhaps the only intriguing part of her book. Otherwise this story, circumscribed by existential horror and boredom, offers no insights into the mystery of life. Its uninspiring content is hardly redeemed by Horn’s feeble attempts to take her own words with a grain of salt. Ill at ease with herself, Horn imparts this uneasiness to her narrative and her audience.

Dubious entertainment best left unread, except by those who need to compare themselves with other ne’er-do-wells in order to feel better about their own predicament.