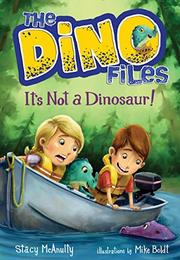 IT'S NOT A DINOSAUR!

From the Dino Files series, volume 3

Just as hatchling dino Peanut is becoming an internet celebrity, another prehistoric creature surfaces in the local river.

Following the events of Too Big to Hide (2015), young Frank attempts to escape the newshounds gathering at his grandparents’ Wyoming fossil preserve by sneaking off with his puppylike charge to look for the elusive Nothosaurus his father claims to have seen as a lad. He finds it almost immediately when the riverine reptile—don’t call it a “dinosaur,” at least in Frank’s hearing—readily comes to Peanut’s call. Worse yet, once the Notho, dubbed Goldie, mistakes a junior fishing competition for a free feed, how are Frank and his family going to keep the two living fossils out of the clutches of the officials and other grown-ups rushing to capture them? Punctuated by frequent cartoon illustrations (final art not seen), McAnulty’s tale flows rapidly along to a triumphant climactic face-off, to be followed, no doubt, by further adventures. Frank and his family are white.

Now that the cat’s out of the bag—or rather the dinosaur and (all right already!) reptile—more complications are certainly on the way.