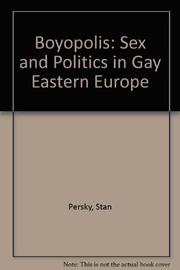 Rambling and self-indulgent, this collection is an awkward hybrid—part philosophical treatise on desire and political change (though regrettably short on the connections between the two), part travelogue, part sexual adventurer's memoir. Boyopolis's subtitle is misleading; there is very little about ``gay Eastern Europe'' here. Persky himself (a columnist for Canada's Globe and Mail) is gay, and there is plenty about his own desires—he finds beautiful young boys, often hustlers, wherever he goes. But apart from affairs and visits to gay bars in Berlin, Budapest, and Vilnius, Lithuania, and an interview with a gay Polish rock singer, the author has disappointingly little contact with gay people and communities. He's put off by the slightest obstacle; finding that there are no gay bars in Zagreb, for instance, he gives up, content to believe that their very absence tells him something. His self-absorption makes his social interactions embarrassing—though entertaining—to read about and allows him to exaggerate the value of his own observations. Such meditations are part of the great pleasure of traveling alone, but Persky's perorations on philosophy, the end of communism, eroticism, etc., are quite thin. Perhaps most disappointing, though Persky interviews political reformers wherever he goes, his essays yield little insight into the impact of the end of Communism on gay people in Eastern Europe; the homosexuality in this book (which is mostly Persky's own) is oddly dislocated from its other thread- -which is the grandiose project of understanding the broader geopolitical changes of the late 20th century. The exciting potential of this project goes largely unrealized; one hopes someone will pick up from where Persky left off and actually find out something about gay lives in one of the world's fastest-changing, most fascinating regions.