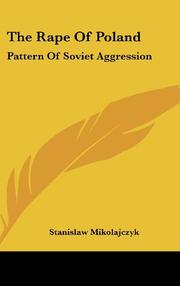 THE RAPE OF POLAND: Pattern of Soviet Aggression

The former head of the Polish Government in Exile, and more recently head of the Peasants' Party in Poland, member of the Cabinet which tried to find a way to cooperate with the Soviet, writes his inside story of the rape of Poland. As a key to the procedure of aggression, this has many parallels, most recently Ferenc Nagy's story of Hungary's capitulation, Behind the Iron Curtain (Macmillan- see report P. 464). Accepted the inevitability of the Mikolajczyk' story being weighted on the side of the opposition to the Soviet, the evidence is nonetheless startling, horrifying and convincing. Cynical from the start of Russia's motives, Russia's promises, he held fast to the spirit that survived two occupations, the strength of the underground, his faith in the western allies eventually coming to Poland's defense. There was the grim incident of the mass graves of Polish officers- the investigation stale-mated; there was the fiasco of the Lublin government; there was the insistence on the Curzon Line; there were the Warsaw massacres and the failure to relieve General Bor (Russia's interference in the air line has a grim familiarity today). Finally, in desperation, he accepted a measure of compromise -- and saw again the dismemberment of Poland, the imposition of puppet leaders, subject to Moscow's will, the emasculation of the skeleton powers accorded the non-communist members of government. He strove to rebuild a strong Peasant Party- only again to be checked. Persecution, murder, torture, pressure on all groups (even the Boy Scouts) preceded the elections, and when they came they were clearly fradulent. A mockery of democracy -- political and economic bondage, with the state- a police state- controlling propaganda, muzzling free speech, dictating education, imposing a fallacious land reform, and preparing Poles, through a hate campaign, for World War III. By the fall of 1947, Poland was crushed. In exile, after a sensational escape, Mikolajczyk pleads for help from outside for the countries in bondage.