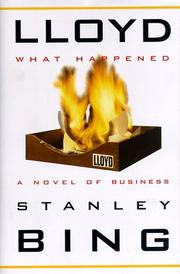 Gassy, deadpan first novel, a tour de farce that both reviles and celebrates the pretentious, treacherous, and luxurious world of corporate middle management, revealed here by Fortune magazine’s business columnist. Bing (in reality Gil Schwartz, also an executive for CBS) offers a mostly plotless series of vignettes about a handful of feckless, back-scratching, buzz-talking senior executives at an unnamed, generic New York corporate conglomerate who are boozing, golfing, gorging, and fornicating their way toward “Moby Deal,” a $100 billion multinational merger that just might make their company the world’s biggest business entity. At story’s center is Lloyd, a good-natured, contentedly married, brown-nosing laptop toter who’s not too wise or too foolish to be anything other than he is (which seems mainly to be a translator of the tenuous lip chewings of his boss, Walt, into zingy corporate-speak). We watch as Lloyd and his fellows attend pointless meetings, wallow in overpriced hotel rooms, guzzle top-shelf liquors, and shed no more than a token tear as they fire thousands of loyal employees to “make the numbers” that their shadowy Chicago CEO, Arthur, wants to see. Bing’s uproarious accounts of boardroom drivel and the sharply dressed buffoons that spout it are more than merely dead-on—he shows that such tactics, however silly, are the tools of a trade whose practitioners are always trying to prove to themselves indispensable. Lloyd ducks the vengeful schemes of his coke-sniffing subordinate Ron, parties heartily, takes his family to Disney World, heroically attends a meeting via cell phone from inside a stranded elevator, and ultimately kills Moby Deal when he learns it will wipe out the worthless chums he’s grown to love. A scathingly snide, occasionally grating send-up of American business that’s rendered with expertise, affection, and flashes of satiric brilliance by one who’s lived it. (Author tour)