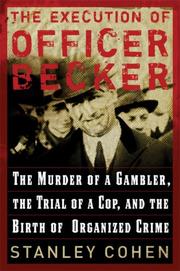 THE EXECUTION OF OFFICER BECKER

The Murder of a Gambler, the Trial of a Cop, and the Birth of Organized Crime

A sensational 1912 murder dissected as a watershed event in the history of organized crime in New York City.

Seasoned magazine and newspaper journalist Cohen joins a number of writers who have taken on the intrigue and lingering doubts surrounding the trial of the only New York police officer ever executed for murder. Becker’s actual guilt or innocence in ordaining a hit on smalltime gambler Beansie Rosenthal may remain forever moot, the author allows. In the steamy summer of 1912, Rosenthal, one of countless numbers of brothel and “casino” operators—all strictly illegal—in New York’s Tenderloin District (now the Times Square area) got fed up with Lieutenant Becker’s constantly shaking him down. The process was, Cohen avers, so regular and perfunctory it was known simply as The System. Becker, one of the dirtiest cops on a dirty force, answered only to state senator Tim Sullivan in Tammany Hall; “between them,” Cohen states, “they had begun to give shape to . . . the incipient structure of organized crime.” But Rosenthal found an eager young District Attorney, Charles S. Whitman, ready to listen to revelations on police corruption, and then to massively leak them to a friendly newspaper reporter. Result: Two days after talking to the DA, Rosenthal was called out of a late-night café in midtown and gunned down by four men. Three years later, implicated by “friends” on the force as well as his criminal enemies, Becker was electrocuted at Sing Sing after two trials that blew NYPD corruption into a public frenzy. Later, when the advent of Prohibition vastly fattened the pot, payoffs went directly to the crime bosses and crooked politicians. “[Cops] would get their cut,” writes Cohen, “but they were now on the bottom rung of the corporate ladder.”