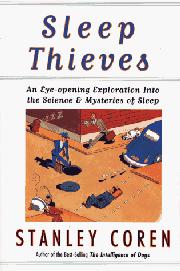 An Eye-Opening Exploration into the Science and Mysteries of Sleep

Forget that early-to-rise myth; getting too little sleep is unhealthful, costly, and downright unproductive, according to this lively, anecdote-laden report on the perils of sleep deprivation. Coren, a Canadian neuropsychologist whose previous work had wide appeal among dog lovers (The Intelligence of Dogs, 1994), will win the kudos of sleep lovers with this one. After a brief look at sleep in the rest of the animal kingdom, he focuses on what happens to the human mind and body when deprived of sleep. Citing research and using notes from a diary he kept while systematically cutting back on his own sleep, he demonstrates that reducing sleep decreases the quality and quantity of one's work. Furthermore, to ignore our biological clocks is to court disaster, for Coren notes that sleep deprivation weakens the immune system, leaving the body more vulnerable to infection and illness, even death. He looks specifically at the effects of sleep deprivation on truck drivers, airline pilots, air traffic controllers, hospital interns and residents, and shift workers such as police and firefighters. The statistics and anecdotes he provides are certainly eye-opening. A 1988 figure he cites gives the cost of sleep-related accidents in the US that year as $56.02 billion, and he presents persuasive evidence that the major disasters of Chernobyl, Three Mile Island, and the Exxon Valdez were all caused by human beings with too little sleep. Tucked in among the sobering data are several charts and tables, quizzes to help one analyze one's own sleep habits and needs, and some tips on overcoming jet lag and getting a good night's sleep. All the justification one needs for turning off the alarm and catching another 40 winks.