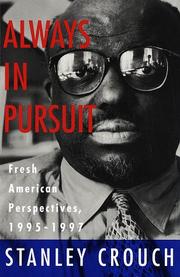 A self-impressed, capriciously hit-and-miss collection of New York Daily News columns and longer thought pieces by jazz guru and social/cultural critic Crouch (The All-American Skin Game, 1995, etc.). Crouch is at his poetic best conjuring jazzmen like Ellington, Parker, and Monk. Here he is elegant and confident, a masterful guide to the artistry of blues and swing. He excels too, in his nuanced look at the novels of Albert Murray, where he probes the crucible of race and the ``bass clef of American life'' in the South. He is equally commanding on Christopher Darden, whom he lambastes for incompetence and for playing an exculpatory race card of his own. However, when Crouch is glib, most often in his Daily News riffs, he bludgeons the obvious with slangy diatribes, offers muddled, vague analyses, and takes flimsy swipes at pet peeves such as ``liberal racism'' and ``Afrocentric types.'' His rants tweak with moot barbs the common wisdom on pedophiles (a menace), Michael Jackson (a fascist idol), army sex (get over it), Hiroshima (a necessary evil), foreign policy (``evangelical humanism''), and Princess Di (why the fuss?). He's at his worst as literato, where everything is Melvillian, and his tendency to condescend often obscures his better insights—as when he feels the sudden need to define ``onomatopoeia'' or when he dubs Faulkner an ``aesthetic scrapper.'' Such errant pedantry has none of the breezy erudition of an Irving Howe, and if anything, underscores Crouch's seeming discomfort with the material. Throughout, his attempts to jumble and reinvent meaning and word order often fail, either because they ring hollow when he has nothing clever to say, or because they fall flat when he misses the beat. Crouch sustains whole stretches of fine, sometimes expert material, but overall this ``intellectual medley'' is wildly erratic, and its best verses rarely transcend its verbiage.