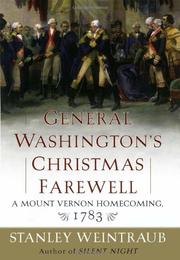 Skillful and prolific pop historian Weintraub (Charlotte and Lionel, 2003, etc.) accompanies The Father of His Country for a few months at the end of 1783.

The revolutionary war Washington had successfully prosecuted against all odds was over. The Treaty of Peace had been negotiated, and fair copies were under sail from England. Redcoats were leaving America. Hessians were deserting before they could be shipped home. The Great Man’s public service appeared to be at an end, and Washington happily prepared to return his commander’s commission to Congress. He simply wanted to get home to Martha at Mount Vernon in time for Christmas. In most histories, where General Washington slept on the trip is, understandably, not treated in great detail. Weintraub (Arts and Humanities Emeritus/Penn State) supplies that detail in abundance. From New York, where the formidable general movingly bade farewell to his officers at Fraunces Tavern (the best known episode of the journey home) to the village of Princeton, then a week in Philadelphia and on to Baltimore and Annapolis before he reached the Potomac and home, the hero was lauded and feted all the way. Balls, dinners, fireworks,and speeches of tribute all testified to the universal veneration for America’s chief citizen. In reply to the encomia, his faithful speechwriter scribbled away, though his Excellency (as Washington was habitually addressed) seemed more than equal to the task. The general sought only to lay his sword aside to become “a private Citizen on the Banks of the Potomack,” and he was hailed as a latter-day Cincinnatus who, after securing his nation’s independence, wanted simply to return to his farm. That he disdained all mention of a crown may be Washington’s greatest gift to what he hoped would become a respectable member of the family of nations. How he became a majestic Chief Executive is another story.

A short, but complete look at the long adieu that moved the newly united states spiritually and politically.