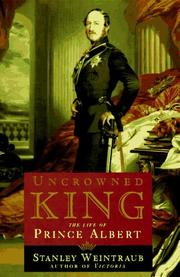 The Life of Prince Albert

A distinguished biographer of Queen Victoria demonstrates the political importance of her beloved husband. From the time of his marriage to Victoria in 1840 until his untimely death in 1861, Albert of Saxe-Coburg was never wholeheartedly accepted by the people of England. He always spoke German in private, and his public speeches were delivered in heavily accented English. A figure of fun in satirical periodicals such as Punch, he never received the civil or military honors that Victoria wanted for him. Weintraub (Disraeli, 1993; Victoria: An Intimate Biography, 1987; etc.) makes clear how much she adored him, how Albert bolstered her self-confidence, and how important their relationship was to the maintenance of the monarchy in the 19th century. Albert never usurped Victoria's role as monarch, but he took advantage of her repeated pregnancies, and of partisan shifts between Whig and Tory, to become acting monarch on occasion, and the most important adviser to the monarch on every occasion. A public figure who carved out a role as a promoter of science, technology, and educational reform, he achieved a public relations coup through his sponsorship of the famous Great Exhibition of 1851, a symbol of Britain's position as the world's dominant industrial nation. Albert's importance was underlined by Victoria's response after his death, when she put the monarchy in danger by virtually retiring from public life for nearly a decade. While establishing Albert's importance, Weintraub provides illuminating details of the private life and daily routine of the royal couple. Their strong physical attraction for each other and their mutual enthusiasm for eroticism in painting and sculpture were combined with a sincere commitment to higher moral standards at court and in public. While providing a window into the private lives of 19th- century royalty, Weintraub also makes a critical historical point about the adaptation of the monarchy to the demands of a more democratic age.