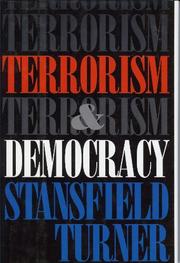 A thoughtful appreciation of the gap between rhetoric and reality that opens when the US is challenged by terrorists. At the outset, Turner (director of the CIA during the Carter Administration) notes that American Presidents have been obliged to deal with offshore extortionists for nearly two centuries, i.e., since Jefferson dispatched a ragtag expedition in 1805 to rescue 307 US citizens held captive by pirates in the Barbary State of Tripoli. In light of latter-day crises from the Pueblo to TWA Flight 847 (which he examines in some detail), Turner effectively puts paid to the perdurable notion that the federal government does not treat with terrorists. Notwithstanding stated policy, he shows that most chief executives have engaged in some sort of negotiations to secure the release of American prisoners when faced with a hostage situation. At the heart of the text is an extended post-mortem on the 1979-80 confrontation that pitted the US against Iran in the wake of the Shah's ouster. Calling on his own deep involvement in the prolonged efforts to free American diplomats held hostage by Islamic militants, Turner provides an insider's reflective insights on what went wrong and why along a weary, humiliating way. He also offers shrewd critiques of the Reagan Administration's generally dismal record in head-to-head encounters with global terrorists. In closing, the author evaluates the options available to democracies forced to consider the often irrational demands and grievances of hijackers, murderers, or other outlaws with a cause. His short list of ten possibilities ranges from assassination through punitive military attacks, improved intelligence, covert action, economic sanctions, and legal recourse. An instructive briefing that makes a persuasive, if understated, case for pragmatism over principle.