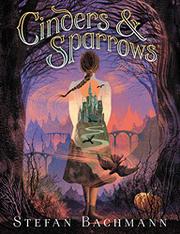 Although a 12-year-old servant girl doesn’t recall the time before she was an orphan, she remembers her secret, powerful name: Zita Brydgeborn.

When she’s summoned to Blackbird Castle, which is ruled over by the unpleasant Mrs. Cantanker, to take her rightful place as the last of a family of powerful witches, it seems almost like a dream come true. But there is much to learn and no one she can fully rely upon, not even Minnifer, the maid, and Bram, the cook, both of whom are friendly toward her. There’s also the scary matter of her family, bewitched and moldering in the dining room. Mrs. Cantanker gradually reveals herself to be a dark force to be reckoned with. When she trusts to her own resourcefulness—which is ample—Zita is able to begin gathering tools of power: a loyal crow, magical scissors, and, finally, her Anchor. She’ll need them all as the depth of Cantanker’s evil scheme is finally exposed and Zita must fight the battle of her life to save her family and protect the world from a dead witch of undeniable power. Bachmann’s worldbuilding is delightful. The castle is rich with enough ghosts and enchanted staircases to satisfy any fantasy lover, and the cast of characters, all seemingly White, is well developed and engaging, especially intrepid narrator Zita.

A suspenseful romp through an entertainingly witchy world.