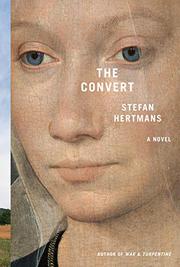 A Christian woman and a Jewish man fall in love in medieval France.

In 1088, a Christian girl of Norman descent falls in love with the son of a rabbi. They run away together, to disastrous effect: Her father sends knights after them, and though they flee to a small southern village where they spend a few happy years, their budding family is soon decimated by a violent wave of First Crusaders on their way to Jerusalem. The girl, whose name becomes Hamoutal when she converts to Judaism, winds up roaming the world. Hertmans’ (War and Turpentine, 2016, etc.) latest novel is based on a true story: The Cairo Genizah, a trove of medieval manuscripts preserved in an Egyptian synagogue, contained an account of Hamoutal’s plight. Hamoutal makes up about half of Hertmans’ novel; the other half is consumed by Hertmans’ own interest in her story. Whenever he can, he follows her journey: from Rouen, where she grew up, to Monieux, where she and David Todros—her Jewish husband—made a brief life for themselves, and all the way to Cairo, and back. “Knowing her life story and its tragic end,” Hertmans writes, “I wish I could warn her of what lies ahead.” The book has a quiet intimacy to it, and in his descriptions of landscape and travel, Hertmans’ prose is frequently lovely. In Narbonne, where David’s family lived, Hertmans describes “the cool of the paving stones in the late morning, the sound of doves’ wings flapping in the immaculate air.” But despite the drama of Hamoutal’s story, there is a static quality to the book, particularly in the sections where Hertmans describes his own travels. It’s an odd contradiction: Hertmans himself moves quickly through the world, but his book doesn’t quite move quickly enough.