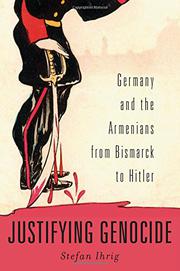 Germany and the Armenians from Bismarck to Hitler

This scholarly study reveals how the Germans “received” the events of the Armenian genocide—and later whitewashed and even found motivation from it.

The attempted extinction of the Armenians by the Turks constitutes what Ihrig (Van Leer Jerusalem Institute) calls “the original sin of the 20th century,” not only by the Ottoman perpetrators, but also by the bystanders. In light of the later Holocaust visited upon the Jews and others by the Nazis, the Armenian genocide—the word was not actually defined by the U.N. until 1948—poses particular questions about guilt for the Germans, who were the Ottoman allies. They were knowledgeable about the massacres (both in 1894-1896 and in 1915-16) and were “inspired” (during the Third Reich) to use such methods and justification for purposes of “ethnic cleansing.” In this compelling narrative, Ihrig finds that the so-called Armenian Horrors were vigorously debated in the government and in periodicals of the time. Several important events would affect how the German public and private spheres came to view the “Armenian question”: the rise of the restive Young Turks in 1908; reports of Armenian rebellion and “treachery”; the strengthening of racial attitudes, especially during the 1920s; and the sensational assassination of the former Ottoman grand vizier in Berlin in 1921. Ihrig’s deep, scrupulous research reveals the official pattern set by the Germans “vis-à-vis the Armenians” as an “enabler” for the Ottomans, later giving way to open justification, denial, and whitewashing of the horrors visited on the Armenian people. In the final chapter, the author reveals how Hitler and the Nazis admired and were influenced by Ataturk and the new Turkey’s policies of ethnic cleansing based on a “foundation of national purity.”

A groundbreaking academic study that shows how Germany derived from the Armenian genocide “a plethora of recipes” to address its own ethnic problems.