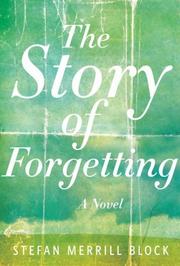 THE STORY OF FORGETTING

How do individuals make sense of a disease that robs loved ones of their memories and, ultimately, of life? That’s the question facing Seth Walker, a smart and sensitive teenager who is trying to cope as his mother declines into a rare early-onset form of Alzheimer’s. His father is no help, sinking into his own gin-soaked decline. Only the stories his mother told of the mythical land of Isidora seem to have any relevance, depicting a land where the lack of memory is a blessing and all live in the constant presence of perfect happiness. Those stories are shared by another loner, an elderly hunchback named Abel Haggard, who also heard them from his mother. Abel, whose losses are physical, lives on the shrinking remnants of his family farm. A full life, he feels, has been denied him because of his handicap. His adored, physically fit twin, Paul, came back from the Army emotionally impaired by tragedy. And while the love of his life, Paul’s wife Mae, briefly returned his passions, she too withdrew, overcome by guilt. He has even lost his daughter, Jamie, who has fled to New York City. Although only ever acknowledged as Jamie’s uncle, Abel helped raise the girl, teaching her to read and, in the process, telling her the stories of Isidora. While the connection between these two stories becomes obvious early on, what makes this novel special is Block’s grasp of the emotional devastation wrought by Alzheimer’s. For family members, the disease presents a mystifying withdrawal, “a full reversal of a life,” as a known, loved individual slips away. Rather than being saccharine, the shared sweetness of the Isidora stories, interspersed between chapters as we learn of their roots, highlight the melancholy that must accompany even the closest bonds once this disease has struck.