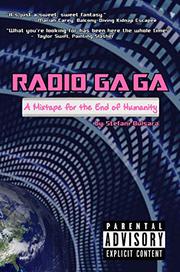 A Mixtape for the End of Humanity

An unnamed narrator details the events that ultimately led to humanity’s extinction on Earth in first-time novelist Bulsara’s sci-fi-infused satire.

Humans are gone, and the apparent sole survivor is this book’s narrator—“the emissary for an extinct race.” According to the narrator, the end of humanity begins with a pop star’s mental collapse, which monopolizes the press. Her agency’s response is to bring a class-action suit against the company where she got started as a child. Other celebrities who began as child stars turn on their former companies as well, and legislators outlaw child labor in the entertainment industry. One entrepreneur’s response is to create an entirely digital singer, from voice to body. The bot, Cyndi Mayweather, becomes a huge star to audiences who believe she’s human. But Cyndi is also the precursor to The Great Disruption—more than 80 percent of jobs become automated and render 71 percent of humans unemployed. Meanwhile, humanity can no longer ignore climate change, which culminates in devastating floods, droughts, and fires in major U.S. cities. The upper class consequently creates geodesic domes that pop up in cities around the world. In America, racism flourishes. Those in a newly minted and domed Metropolis are predominantly white; black and brown Americans live in poverty. As they’re contending with the effects of class conflict, humans also face and are grossly unprepared for viral outbreaks. As humanity is evidently doomed, the narrator has a plan to document its history and find a way to warn the universe, provided there is life on other planets. Despite the author’s opening “Liner Notes” calling this novel a “mixtape” and the narrator “glitchy,” Bulsara’s story is fairly traditional. The narrative, for example, is primarily linear and often focuses on specific characters, such as JA-NL, a young black girl fighting against the wealthy’s attempts to control less fortunate citizens. Likewise, Bulsara so seamlessly incorporates song lyrics—and occasionally movie quotes—that readers who don’t catch a particular reference won’t be lost. Though JA-NL is a standout, other striking characters include Brand-N, whom readers see undergo the Becoming of Age ceremony (an initiation into upper society), and the narrator, who eventually reveals their identity. Bulsara is funny; the international domed nations form the United Federation of City-States (UFoCs), so that the inhabitants are known as UFoCers. Additional signs of satire are much more biting, like celebrity name-dropping and a noticeably dim view on social media (a platform for easily manipulating people into becoming fans of Cyndi). There are also blunt but insightful points on racial discrimination: the Moloch 5000 is a machine that decides a student’s future career and educational path by first scanning said student’s skin color. The novel’s addenda consist of a short but helpful glossary (e.g., dronarazzi, which are essentially paparazzi drones) and a breakdown of the social structure within the story. And notwithstanding the narrator’s assurance to readers that humans are extinct, the ending is not as bleak as some may anticipate.