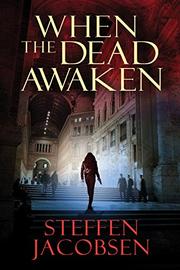 WHEN THE DEAD AWAKEN

Danish surgeon Jacobsen’s third novel, and his first to be translated into English, sets a Naples prosecutor determined to avenge her father against the criminal Camorra that killed him and an awful lot of other people.

When a crane drops a container that's about to be loaded onto a Mediterranean-bound ship, the crane operator is so frightened of the consequences that he jumps to his death. And no wonder, for the container, burst open, turns out to hold bag after bag of human remains, and the accident’s taken place right under the eyes of Camorra assassin Urs Savelli. Sabrina D’Avalos, the assistant public prosecutor assigned to identify all the corpses from F to L, tells her boss, Federico Renda, that she’s linked two of the victims, eight-months-pregnant attorney Lucia Forlani and her son, Salvatore, to the rash of violence back in 2007 that killed her own father, Gen. Baron Agostino D’Avalos—who had placed mother and son in the witness protection program—and consigned Renda to a wheelchair. Lucia’s husband, Giulio, was murdered the same week she disappeared. So were virtually all the top scientists working with him at Nanometric, a company whose proprietary technology sought to prevent forgeries from passing themselves off as the real things. Since Camorra’s principal source of income is from designer knockoffs and fakes, it’s assumed that the murders are the work of Savelli, their most active killer, and the woman known only as L’Artista, who’s so expert that it’s a rare privilege to be killed by her. It doesn’t matter to Sabrina that Renda’s not that interested; she’s motivated enough for the whole office—and, it turns out, violent enough as well.

Jacobsen isn’t afraid of clichés, and genre fans will find plenty of familiar character types and situations here, along with an impressive set of variations on the motif of raising the dead, none of them pleasant.