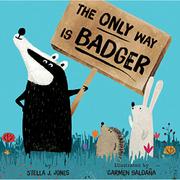 THE ONLY WAY IS BADGER

Badger bullies—well, badgers—other animals into accepting his delusions of superiority—but finally realizes the error of his ways.

After the expressive, comical animals on the cover have hinted at the premise, a double-page spread of hand(paw)-painted posters against a bleak, gray, cement-block wall reinforces it, with slogans such as “Be More Badger.” Cheerful, colorful, flower-studded grass and animals that somewhat resemble the characters in Jon Klassen’s I Want My Hat Back accompany the ominous opening words: “Deep in the forest, something wasn’t right. Overnight, a wall had appeared. And someone had covered the trees with strange posters.” The mystified forest creatures are soon assured by boisterous, egotistical Badger that he is “telling it like it is” with his declaration that badgers are best. He insists that he is helping them by ensuring that they all exhibit badgerlike traits. Deer—previously interrupted by Badger when trying to voice an opinion—becomes the first animal banished over the wall, supposedly because he cannot dig. Badger incites jeering at Deer. With each new test, more animals leave, amid clever wordplay and humorous, absurd art. Finally, Badger is alone in a world that he has painted in his fur’s black-and-white. His final poster creates a happy ending unlikely to occur in the real world of politics. But who mentioned politics?

A lighthearted look at the consequences of exclusion and self-absorption.