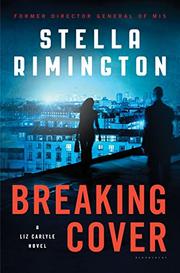 Now that Vladimir Putin is flexing his muscles in the international arena, Rimington, who always has a sharp eye for contemporary headlines (Close Call, 2014, etc.), provides another dose of Cold War tension for MI5 and MI6.

Whether they’re civil liberties lawyers like Jasminder Kapoor or bedmates of MI5 staffers like lecturer Tim Simpson, Peggy Kinsolving’s lover, British citizens are understandably wary of the new surveillance regime they think is tracking their every word and move. Sir Peter Treadwell, the new chief of MI6, has the novel idea of creating the position of Communications Director for someone who can serve as the service’s public face in briefings and conferences designed to make its workings more transparent. Liz Carlyle, who doesn’t want to leave MI5 to take the job, recommends Jasminder for the position, and the rest is history—Cold War history, since Jasminder comes under increasing pressure from her lover, Norwegian private banker Laurenz Hansen, to make MI6 operations even more transparent for him and a close circle of his associates. Meantime, Liz, who knows nothing of Jasminder’s troubles, gets word from Mischa, a walk-in Russian informant, that Russia's Federal Security Service, FSB, buoyed by its recent successes in Crimea and Ukraine, has hatched Operation Pincer , a plot to infiltrate both MI5 and MI6 by compromising and turning staffers in both organizations. It looks like a dark day for her majesty’s government unless Liz and her network of colleagues and friends can spot the clues and follow them in time to prevent the U.K.’s intelligence services from becoming wholly owned subsidiaries of FSB.

Perhaps the most vividly plotted of Rimington’s recent spy thrillers, though still less persuasive when it ventures into foreign waters than when it exposes interpersonal rivalries among staffers who are supposed to be on the same side.