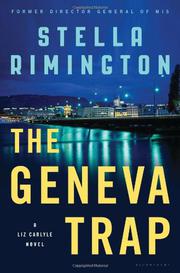 Someone’s threatening the security of the U.S. drone program, and according to MI5’s best information, it seems to be a combination of—wait for it—the Russians, the North Koreans and the South Koreans.

Before she ever applied to the Security Service, Liz Carlyle (Rip Tide, 2011, etc.) heard a lecture by political theorist Alexander Petrov that made a profound impression on her. Now, years after he joined Russian intelligence, he pops up in Geneva with an urgent message he’s only willing to deliver to “Lees Carlisle.” The message is that unauthorized outsiders have managed to breach the encryption codes of Operation Clarity, the U.S.-led program that governs the operation of drone aircraft. Already, unbeknownst to Liz or Petrov, computer jockeys in Nevada have watched in horror as one of their drones in the Mideast suddenly seemed to take on a mind of its own and ignore their commands. Naturally, Henry Pennington, Liz’s sniveling contact at the Clarity Secretariat, refuses to believe that anyone could have infiltrated the agency’s defenses. So Liz, seeking a clue to the real motives and identities of the conspirators, looks to Charlie Fielding, of the Ministry of Defense, and Andy Bokus, the CIA’s Station Chief in London, for help. As if Liz didn’t have enough on her plate already, Cathy Treglown, whose father has been keeping company with Liz’s mother, is being pressed by members of the French commune she just left to cough up a serious donation to their arms-purchasing fund—unless she wants one of their thugs to go after her little boy.

Considering the magnitude of the threat and the echoes of From Russia with Love and Diamonds Are Forever (the film, not the book), everything gets wrapped up suspiciously neatly, even though, as Liz sagely remarks, “I wonder if we’ll ever know what this was really all about.”