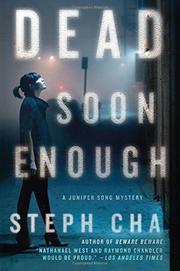 Tracking the surrogate mother for a high-maintenance client leads a bright young shamus to delve into Armenian cultural history and the meaning of closure.

No longer a rookie private investigator (Beware, Beware, 2014, etc.), Juniper Song has graduated from digging through the trash of suspected liars and cheaters to actual detective work. Her latest client, Dr. Rubina Gasparian, has some control issues about what exactly she wants investigated. Song is game for the job, though she has suspicions about her assigned task: to follow Rubina’s very pregnant cousin Lusig, who's acting as a surrogate for the infertile Rubina. Rubina has been doing some amateur detective work herself and has already taken the liberty of applying a GPS device to Lusig’s car. Song learns that one of the reasons Lusig has evaded Rubina’s watchful eye is that she’s engaged in some detective work of her own: Lusig’s closest friend, Nora, has been missing for about a month, and Lusig is tenaciously tracking down untapped leads. It seems that Nora’s confrontational blog, Who Still Talks, a forum on the 1915 Armenian genocide and its deniers, may have brought the historical debate from online chatter to something up close and personal. In order to protect what’s most important to her, the child Lusig is carrying, Rubina hires Song to find Nora so Lusig can stay home and let nature take its course. Apart from milking Veronica Sanchez, her LAPD connection, it appears the best thing Song can do is learn about the genocide, the deniers, and Who Still Talks. Her search leads Song down a rabbit hole of complex relations, perhaps involving hazy government connections, though the truth of what happened to Nora may be much closer to home.

Once more, Cha often sacrifices suspense and plot twists for a more philosophical approach to mystery, though she clearly knows where she wants to go.