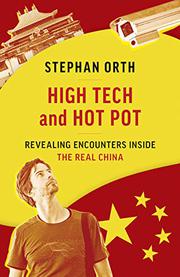 Encounters and Escapades Inside China

A German journalist explores China’s mega-cities and remote outposts, takings risks that most tourists would avoid.

In this chronicle of his fourth trip to China, Orth, a former travel editor at Der Spiegel whose previous travelogues were about Russia and Iran, offers an unofficial account of “how the Chinese see the world…and about where this huge country is heading,” while acknowledging that any views formed can change. In a narrative that combines elements of memoir, travelogue, and cultural exposé, the author examines China’s infamous surveillance, state-sanctioned media, censorship, and reeducation camps, also providing snapshots of daily life that portray tech-savvy people who've mostly adapted to its breakneck pace. Deviations from the party line fascinate, and some of Orth’s hosts open up through WeChat and in-person interviews. Though they may not be a representative cross-section—“mostly middle class [people] who are cosmopolitan and exceptionally hospitable”—their stories shed light on how citizens live in a restrictive society: A subversive Beijing artist discusses the state mafia that claimed her studio. A woman motivated by the loss of her childhood home documents village traditions, impressing Orth with her innovation. An exile from the IT world embraces a Buddhist lifestyle. Even a Shenzhen policewoman disobeys workplace rules. Throughout, the author describes his newfound friends with candor, and he ably conveys the level of pollution and brash consumerism he encountered as well as the charm. His lively tales of navigating tense situations—e.g., meeting a cult leader—are particularly memorable. When he set out alone, such as in Xinjiang, where Muslim Uyghurs are persecuted, the narrative necessarily darkens. But the bulk of the narrative is far from bleak, and Orth includes clever anecdotes that stem from his “laowai” ("always a foreigner") status. Photographs and humorous mistranslations ("Be careful clothes sandwich," an escalator warning) embellish the work.

This open-minded, bemused portrait of a history-rich yet futuristic China beguiles.