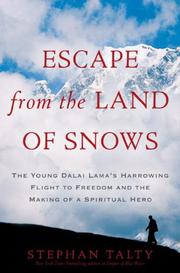 ESCAPE FROM THE LAND OF SNOWS

A riveting, informed narrative about the current Dalai Lama’s 14-day escape from Chinese-occupied Tibet in 1959.

Journalist Talty (The Illustrious Dead: The Terrifying Story of How Typhus Killed Napoleon’s Greatest Army, 2009, etc.) uses this remarkable historical event to tell the greater story of Tibet’s transformation from a veiled kingdom to a world cause, and the Dalai Lama’s coming of age from a teenage king and living god to an international spiritual leader. The author effectively gives the reader an introductory lesson in Tibetan history and a sense of the Tibetan people while maintaining the pace of an adventure tale. The Dalai Lama is always at the center of the story, even in passages told from other points of view, including Tibetan Khampa soldiers and CIA agents. After being discovered as the next Dalai Lama at age two, then struggling with the loneliness and formality of palace life, he ascended the throne early, at 15, upon Mao’s invasion. The Tibetan people endured Chinese occupation and escalating brutality for nine more years before a true rebellion emerged in response to a rumor that the Dalai Lama’s life was threatened. As his peace-loving people tried to hold off the ensuing Chinese attacks on the palace, the Dalai Lama was forced to flee with plans to establish a provisional government outside the capital. But after days of sandstorms, blinding sun, avalanche blizzards, dysentery and threats of leopard attacks in the 19,000-foot passes of the Himalayas, the Dalai Lama and his group learned that the Chinese were on their trail. The chase was followed by President Eisenhower, protesters worldwide and a colorful cadre of journalists who introduced Tibet to the world, “becoming famous just as it ceased to exist.” The Dalai Lama was granted asylum in India, where the he still resides, mournful for Tibet but now able to spread his culture’s peace and compassion in ways previously unimaginable.

A great read for Tibetophiles old and new.