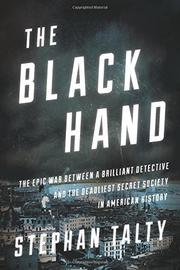 A thrilling tale of the “Italian Sherlock Holmes.”

Joseph Petrosino (1860-1909) started out at as a shoeshine boy and ran a garbage cart, but through a Tammany Hall connection, he got a job as a detective with the New York Police Department. Ostensibly the story of the mob and their uninhibited growth at the turn of the 20th century, Talty’s (Hangman, 2014, etc.) book presents much more, narrating the desperate struggle of one group of immigrants, the Italians, trying to eke out a life and raise their children without fear of abuse. They sought acceptance but suffered due to the acts of a few of their number. The government was biased, the police were indifferent, and most immigrants struggled to find jobs. While the Black Hand crime organization terrorized the Italian community, police protection was ineffective, virtually nonexistent, and the Secret Service only protected the rich and powerful. As the terror spread beyond Italian communities, calls went out to jail, deport, or bar absolutely all Italians from entering America. Petrosino convinced the police commissioner to allow him to form an Italian Squad. It was only five men, but all were fluent in Sicilian, expert in disguises, and able to blend in sufficiently to learn the secrets of their quarry. In the first year, they halved child kidnappings, protection rackets, and bombings, with little support from fellow police. Petrosino was beyond remarkable, dedicated to his work, absolutely fearless, and furious at any who would pay the Black Hand’s demands. The story of what he did almost single-handedly, as well as the systems he devised to do so, is fascinating, and the persecution, low pay, abuse, and ignorance of the immigrants’ rich culture strike a chord close to home these days.

Talty is an excellent storyteller, and this particular story is highly relevant as America’s next set of immigrants struggles for acceptance.