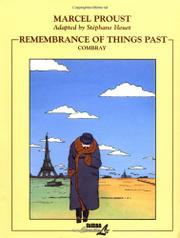 REMEMBRANCE OF THINGS PAST

This comic-book version of Proust’s masterpiece caused quite a stir when it first appeared in France, but the hoopla is undeserved. Heuet’s adaptation is neither a disgrace nor a work of genius; it’s simply a respectable (and respectful) graphic narrative much in the vein of the old Classics Illustrated titles: heavy on text and somewhat generically drawn. This slim book adapts only the first two sections of Swann’s Way, the “overture” and “Combray”; a dozen or so more volumes are promised. The artist and his American publisher have made some odd choices. With so many fine English translations to chose from, NBM instead commissioned a new one from Joe Johnson, who begins by ignoring the now more accepted (and more accurate) overall title, In Search of Lost Time. This is especially odd because the translation is in general quite literal. The artist’s main error is more serious: he chooses a visual style totally unsuited to his characters and their creator’s prose. Everyone here has little dot eyes and dash mouths, a visual homage to Herge’s Tintin that makes no sense, shatters our feel for the period, and cheapens the intensity of Proust’s internalized narrative. Nonetheless, Heuet’s version succeeds quite well as a beginner’s guide to Proust: we get the famous magic lantern of the narrator’s spoiled childhood, the equally famous madeleine, and an introduction to the two “ways” of Combray. Heuet captures Proust’s strong sense of social order and also his delight in the eccentricities of those around him, from his hypochondriacal aunt to the unsuitably married Swann. Some of the landscapes are kitschy, but the city scenes are well studied. The only real visual challenge here is distinguishing among the characters.

Inviting enough to make readers seek out the novel—which means Heuet has done his job.