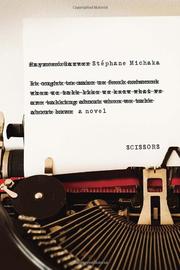 Loosely based on the life of Raymond Carver, this book is more than a love triangle—it's a love polygon?—of a writer, his work, his editor, his significant other and alcohol.

Scissors is the nickname of Raymond’s editor, Douglas, a man with such a high opinion of himself that he might be divine. Raymond is married to Marianne. They married young and were parents before they knew it. Burdened with debt, working dead-end jobs, Raymond and his wife sacrifice so Raymond can write, and he does, but he drinks, too. When Raymond’s work finds its way to Douglas’ desk, lives are changed: Douglas’, Raymond’s, Marianne’s and readers’. As Douglas observes, “If Raymond hadn’t existed, I would have invented him.” Raymond is that good and that important to Douglas’ sense of his mission. But Douglas cuts so much from Raymond’s work that it is unrecognizable. As Raymond and Douglas exchange letters and finally meet, as they struggle over Raymond’s work, the novel becomes a slippery study of writing and re-writing. Raymond’s a mess; as he becomes successful, he feels fraudulent. Is the work his or not? Four short stories appear in the novel. Douglas’ savage cutting of the first two is dramatized exquisitely. The book’s weakness is that one of the included stories is too good an imitation of bad writing. Raymond’s life, Douglas’ life and the "lives” of the later stories are inextricably linked in unexpected ways. The book’s debts to its famous subjects are repaid. It is a measure of the book’s success that readers need no knowledge of its famous subjects to appreciate it.