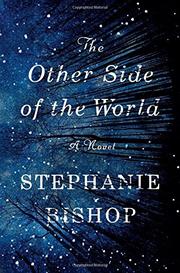 THE OTHER SIDE OF THE WORLD

Charlotte, a young mother in 1960s Cambridge, England, longs for her pre-baby artist self.

Her husband, Anglo-Indian lecturer and poet Henry, just longs for warmth and sun. Worried about Charlotte, who walks in all weather to escape the confining cottage, and about their baby daughter’s health in the perpetual damp, Henry applies to immigrate to Australia. Charlotte reluctantly agrees. But warm and sunny though it may be, Australia is no paradise; Charlotte is bored and listless, and Henry faces racism at work. This second novel brought Bishop (The Singing, 2014) widespread praise in Australia. Her writing is beautifully expressive. Henry looks at the river near their new home in Perth and thinks of India: “It happens like a chemical reaction: the sight of the new country immediately provoking a memory of the old.” After a fight, Charlotte “feels her insides sink, her heart a dark cave, a tiny bird fluttering wildly inside it. There is a speck of light in the distance but the bird cannot find it. She will keep doing what she does not want to do.” Bishop also imparts a cinematic feel—the ticking of a clock as Charlotte draws Henry’s mother in her deathbed, “Her skin is thin and comes together in pleats like the cooled surface of warm milk.” Charlotte, hacking off her daughter’s matted braid: “She has to saw at it, opening and closing the blades, the cutting making a rough scratchy sound.” Colors, sounds, and sensations infuse every page with Charlotte’s and Henry’s worlds. The ending is equally cinematic and as heartbreaking as they come.

An artfully rendered meditation on marriage, home, and identity.